Monsters in the basement 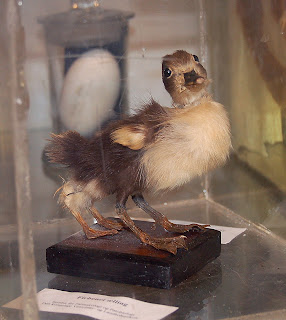 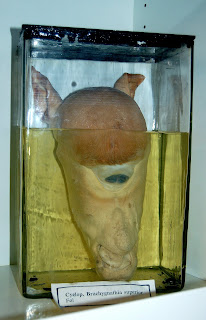 A few days ago, I paid a visit to the department of veterinary medicin at the University of Copenhagen - actually just to use the library, but then I started wandering about the premises, thinking about the time I worked here as an assistant teacher. So I ended up in the basement of one of the buildings, and stumbled across the departments collection of freaks, monsters and malformed animals of all kinds. I managed to take a few pictures, but had plenty of time to think about the kind of mishaps that nature can produce.

The first and most eye-catching one was a cyclopic foal. This is a special condition where the eyes fuse in the middle of the head, and forms what looks like one big eye, but where you sometime can see, that it is in fact two separate eyes very close together (talk about being cross-eyed!!). Most of these animals are still-born, but this one actually survived a few days, before it was put out of its misery.

Then there was a case of siamese duckling, or rather a duckling with an extra abdomen and an extra set of legs. This one was apparantly very energetic and vigorous, but was killed to be part of the collection.

The final one, which almost gave me a combined head- and toothache, was a lower jaw of a pig, where one of the teeths had grown to an outrageous degree. This is something that happens quite often apparantly, but maan it must have been painful.
Indsendt af Lars Thomas kl. 12.00