The moose is back - and this time they mean business!

Inspired by the fact that on November 19th. five young Swedish moose arrived in Denmark, and is now galliwanting, or whatever it is you call the rather peculiar gait of a moose, around in a very big enclosure in Lille Vildmose in Northern Denmark awaiting the day next spring, where they will be set free and become the first officially sanctioned wildliving moose in Denmark for about 5000 years.

I use the words ”officially sanctioned” very carefully because there has been a number of cases where said large member of the deer tribe, has taken it upon itself to turn up in Denmark under its own steam, thus making a mockery of the 5000 years. Most people have no idea – and if you look a the general build of the thing, who can blame them – that moose are in fact excellent swimmers. The are not exactly sprinters, but they have incredible strenght and stamina, and they can even dive and swim under water for considerable distance and for several minutes on end. In fact I am quite convinced, that a large proportion of lake monster-sightings in the Northern Hemisphere are in fact sightings of swimming moose – but that’s an entirely different story.

Whereas Denmark lost its population of moose several thousand years ago, the Swedish population is big and healthy and has apparently been so for a very long time. So every now and then a moose takes it upon itself to swim from Sweden to Denmark. Nobody really knows why this happens, whether it is deliberate, or whether an animal simply gets disoriented and ends up in swimming in the completely wrong direction. It happens to migrating birds all the time, so why not moose? It doesn’t really matter how or why – it is a monumental feat. The shortest distance between Sweden and Denmark is 4 km, but that is between the towns of Elsinore and Helsingborg, an area with a lot of sailing activity and very powerful currents, and nobody has ever seen a moose in this area. So we are in fact probably talking about a swim of at least 6 or 7 km.

Some never make it of course – in a couple of instances, dead moose have washed ashore in Denmark, but some make it, generally landing on the North coast of the island of Zealand, somewhere west of the town of Elsinore. This in a fairly thinly populated area with a lot af agricultural land, and a fair selection of wooded areas, one of which, Grib Skov, if in fact one of the two biggest forests in Denmark. So it is basically a very suitable area for a moose. 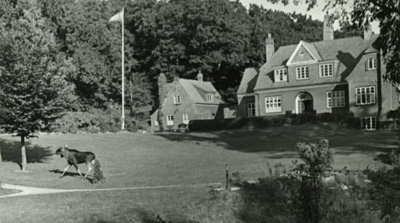 The first and most successful one landed in Denmark in 1933. It managed to live in Denmark for no less than 18 years, most of the time around the village of Nødebo which is located more or less in the centre of the afore mentioned Grib Skov. After some years it was so used to people, that it would turn up in the middle of the village and eat the vegetables from the greengrocers’ boxes and the flowers in people’s gardens. Since then, there have so far been 5 others, and one that was bought by a Danish newspaper and released in the same general area a year after the first one died in 1951, in the hope of recreating the popularity of the first moose, which had turned into quite a tourist attraction.

That one had to be recaptured within a few weeks, because it was making a nuisance of itself. It was sent to a zoo, where it unfortunately died soon after. It didn’t work out to well for the other ones. One of them, a very large bull had to be shot, two of them had a rather messy end following an all to close encounter with respectively a car and a train, one simply vanished, and one was found sick and dying in the forest. 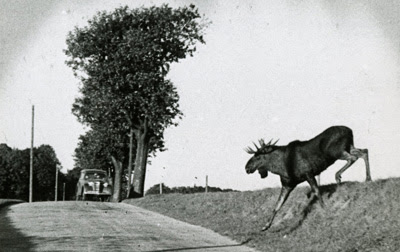 According to Swedish authorities, a few others have actually tried to swim across, but have been stopped before they got more than a few hundred meters away from the Swedish coast, and brought back to the safety of their homeland.

And then of course, there are the ones lurking in my files – there has been a few other sightings of moose in the same general area, one as far back as 1897, but they have never been confirmed in the same way as the others, although I do know of a couple who have in their possession a set of massive moose antlers, and they are adamant they are from an animal shot by the lady’s grandfather near the town of Roskilde sometime during the First World War. Oh – and a few years ago a dead moose washed ashore on the North coast of the island of Bornholm, the extreme Easternmost island in Denmark. That one must have tried to swim from the South of Sweden.  but probably drowned from exhaustion – it is after all a swim of at least 50 km.

And then we have the newcomers – who knows, in a few years time we may have a permanent population of moose in Denmark, and I for one am looking forward to it. Meeting a moose in the wild is absolutely magical. I have heard blackbirds making more noise turning over leaves on the forest floor, than a moose silently drifting through the forest.
Indsendt af Lars Thomas kl. 12.22